"We sing a song to Brigid,
Brigid brings the Spring,
Awakens all the fields and the flowers,
And calls the birds to sing" 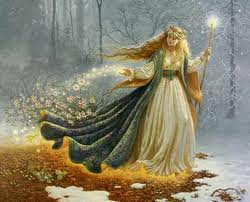 Today is the feast of St. Brigid and the first day of Spring. St. Brigid is sometimes regarded as the female patron saint of Ireland. The story goes that as a young girl, Brigid was very beautiful and many young men wanted to marry her. She prayed that God would make her ugly so that she could love him alone. God heard her prayer and made her very ugly. She then became a nun and as soon as she did, God made her more beautiful than ever.

As a nun, Brigid quickly became known for her generosity and charity. Many miracles were associated with her including healing the sick. Brigid was also renowned for her love of animals and many stories were told of her kindness to stray and starving dogs and saving wild animals from huntsmen.

In Ireland, the feast of St. Brigid is celebrated by going to mass.
I like to celebrate it as I chose Brigid as my confirmation name in honour of my Grandmother Mary Brigid and her Grandmother, who was also named Brigid.

This is a St. Brigid's cross. The story is told that St. Brigid picked rushes from the floor to weave this cross and used it baptise her pagan father on his death bed.
It is typically hung by the door to protect the house from fire and harm. Traditionally a new cross is made on February 1st, burning the cross from last year. As I like the one I have and never learned to weave a cross, I don't think I'll burn mine this year! Maybe it's a craft I'll master for next year!
Posted by Sweet Auburn Life at 9:47 pm