As June draws to an end the showy flowers of early summer are all but gone. 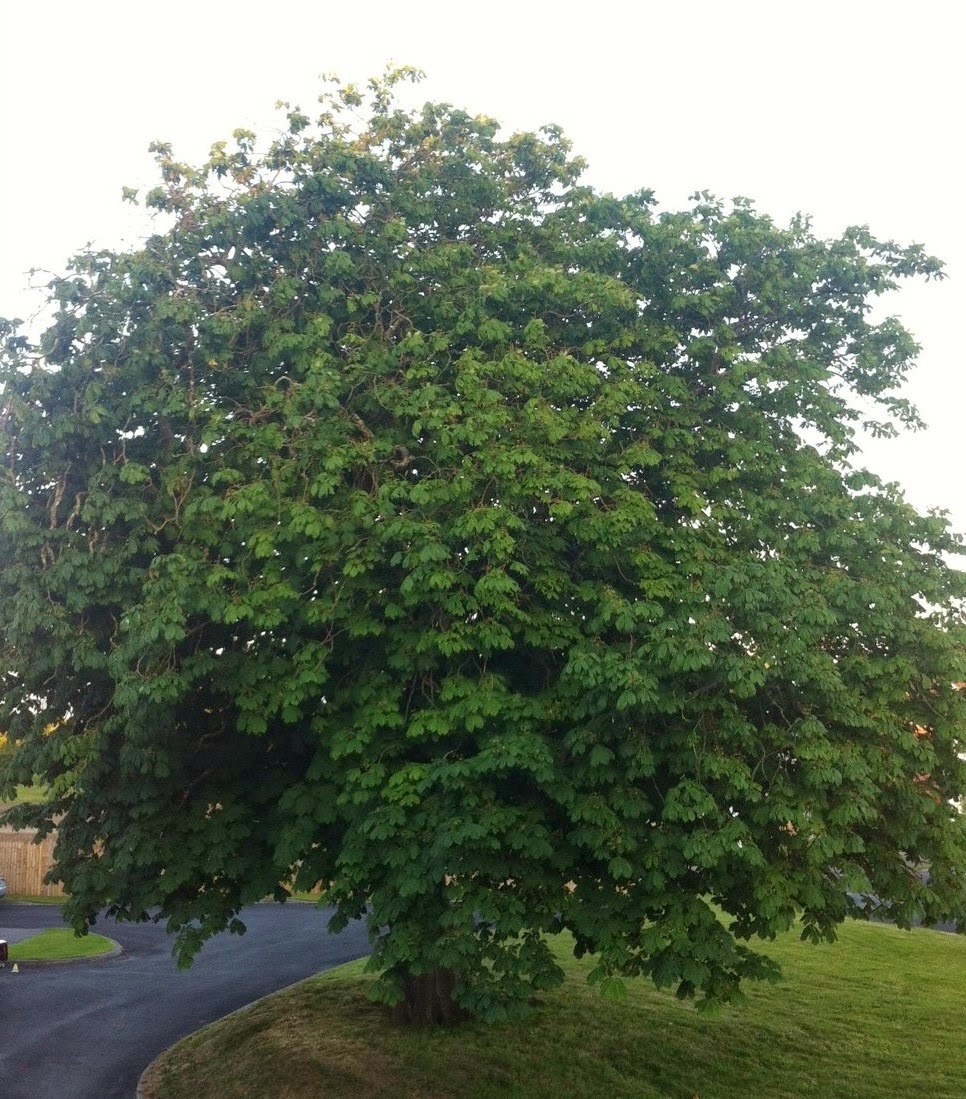 As with lots of plants, the demise of their flowers gives way to fruit. This fruit will contain the seed or nut. The outer husk of this fruit is poisonous. In fact, the raw seed, bark, flower and leaf are all unsafe and can even cause death if ingested. 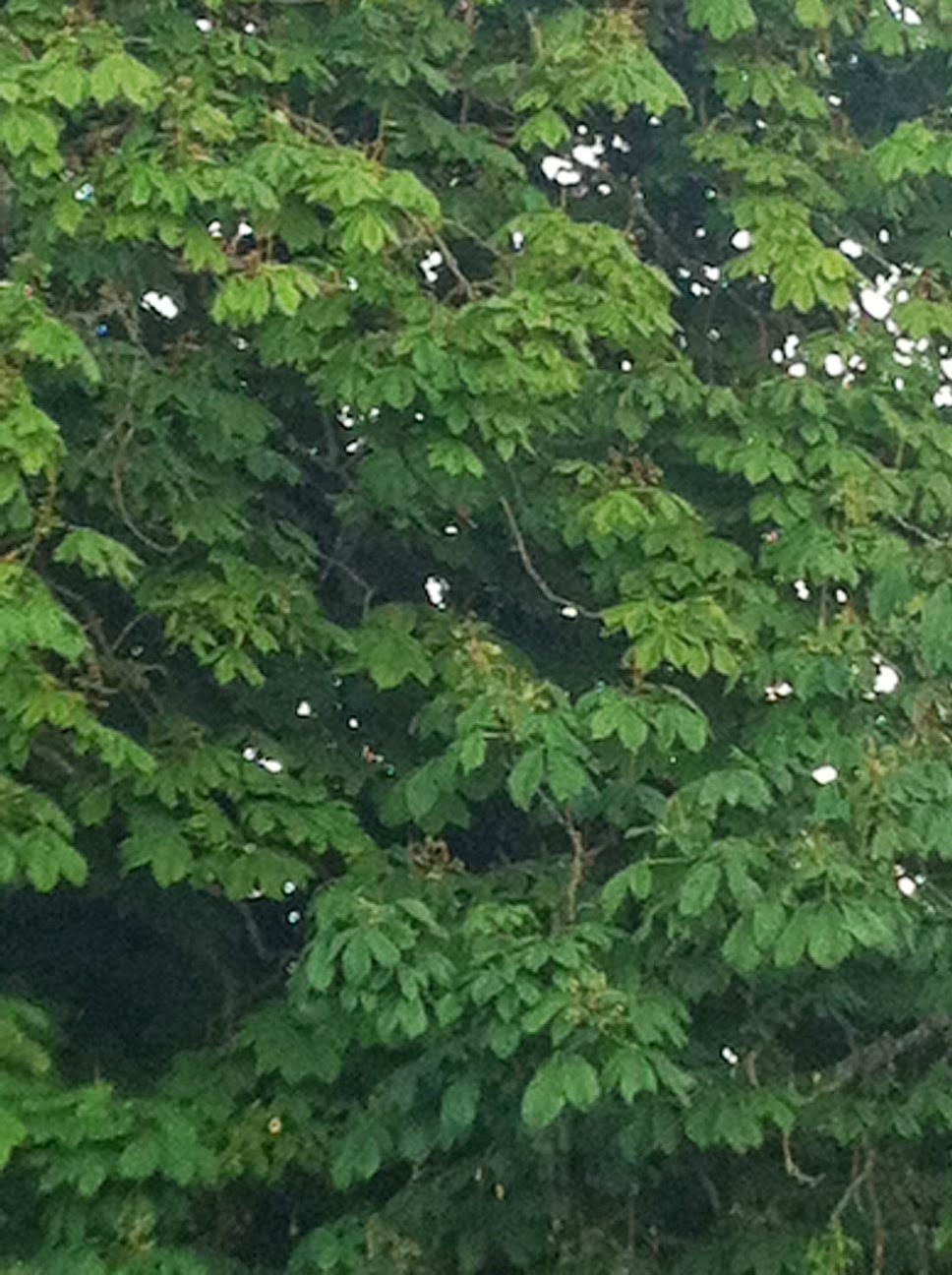 Looking at how huge the tree seems now in full leaf it reminded me of a poem my Granddad used to recite, a poem he learned in school as a boy; The Village Blacksmith by Henry Wadsworth Longfellow.
﻿ 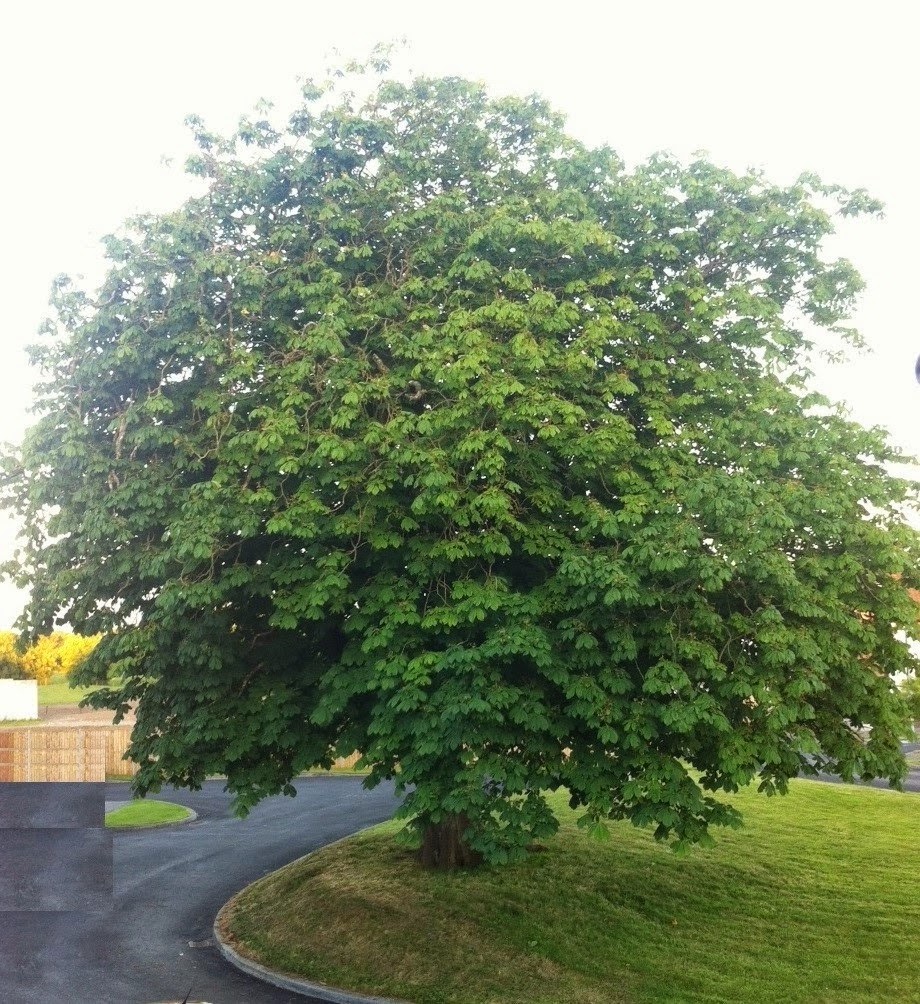 Under the spreading chestnut tree
The village smithy stands;
The smith, a mighty man is he,
With large and sinewy hands;
And the muscles of his brawny arms
Are strong as iron bands.
His hair is crisp, and black, and long,
His face is like the tan;
His brow is wet with honest sweat,
He earns whate'er he can.
And looks the whole world in the face,
For he owes not any man.
As a child, I found it quite a sad poem about an honest, hardworking man who lost his wife at a young age and was trying to raise his children alone.
He goes on Sunday to the church,
And sits among his boys;
He hears the parson pray and preach,
He hears his daughter's voice,
Singing in the village choir,
And it makes his heart rejoice.
It sounds to him like her mother's voice,
Singing in Paradise!
He needs must think of her once more
How in the grave she lies;
And with his hard, rough hand he wipes
A tear out of his eyes.
The "spreading Chestnut tree" that he writes of fell victim to progress in 1876 and was cut down in order to widen the street. The children of the town had a beautiful chair made from the wood of the tree and it was presented to Longfellow on his 72nd birthday. A portion of a verse from the poem was etched along the rails of the chair...
And the children coming home from school
Look in at the open door;
And catch the burning sparks that fly
Like chaff from the threshing-floor.
Longfellow was so touched by this gift from the children, he wrote a poem as a way of saying thanks... 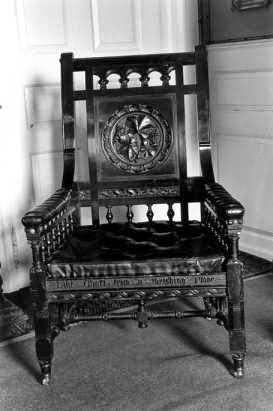 From My Armchair
Am I a king, that I should call my own
This splendid Ebon throne?
Or by what reason, or what right divine,
Can I proclaim it mine?
Only perhaps, by right divine of song
It may to me belong;
Only because the spreading chestnut tree
Of old was sung by me.
There by the blacksmith's forge,
beside the street,
Its blossoms white and sweet
Enticed the bees, until it seemed alive,
And murmured like a hive.
And when the winds of autumn, with a shout,
Tossed its great arms about.
The shining chestnuts, bursting from the sheath,
Dropped to the ground beneath.
And now some fragments of its branches bare,
Shaped as a stately chair,
Have by my hearthstone found a home at last,
And a whisper of the past.
And thus, dear children, have ye made for me
This day a jubilee.
And to my more than threescore years and ten,
Brought back my youth again.
Only your love and remembrance could,
Give life to this dead wood,
And make these branches, leafless
now so long, Blossom again in song.
Henry Wadsworth Longfellow