Last Friday Night was Culture Night!
Culture Night is a night of artistic and cultural entertainment around Ireland where Art Galleries, Museums, etc. throw open their doors and put on events which are all free! Lovely Michelle over at michellemadethis had her own Culture Night at the Cottage.
So what did the Auburn’s do?
We attended a Gala Concert featuring The Priests at the beautiful St. Peter and St. Paul’s Church in Athlone. The concert wasn't free but it was for a really good cause. The church was built in 1937 and renovated in 2007. The money made on the night will go towards repaying the bill!

The church looked amazing decorated with beautiful floral arrangements, lanterns filled with candles and the altar uplit with blue lights. 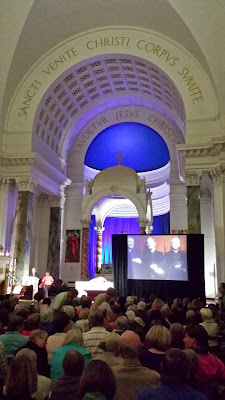 For those of you who are not familiar, The Priests are a hugely talented classical trio from Northern Ireland and as the name suggests are catholic priests. 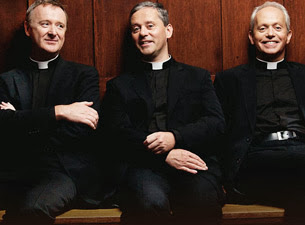 So when they are not releasing No.1 albums and touring the world, they are doing their normal priestly duties in their respective parishes.

They entertained us with classical pieces from around the globe, some more sacred pieces and some well know Irish tunes like this one....


They even snook in a little Christmas carol, You'll Never Walk Alone (which really pleased Mr. Auburn as a Liverpool supporter!) and Eleanor Rigby by The Beatles.

A truly cultural night was had by all!!
Posted by Sweet Auburn Life at 9:38 am